TFSS the TDSB Make History With the Toronto Marlies

TORONTO – On February 8, 2012 history was made at the TDSB Day with the AHL's Toronto Marlies hockey club. Close to 7,000 staff and students attended the sold out game on February 8th, helping set a new, all-time attendance record for the Ricoh Coliseum. 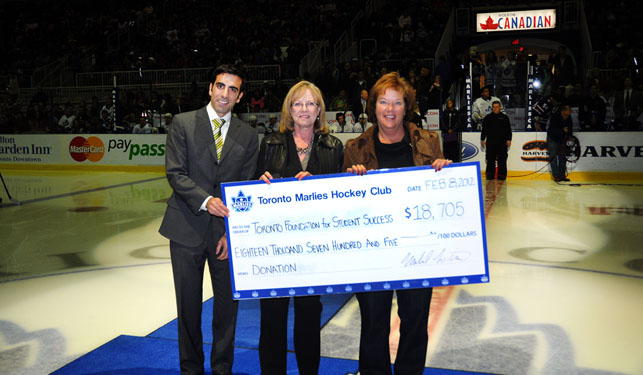 The boisterous crowd played a key factor in spurring the Marlies on to a 4-3 victory over the Rochester Americans. The special 11:00 am game had a distinct TDSB flavour. The student choir from George R. Gauld Junior School sang both national anthems as students from Macklin P.S. displayed a giant Canadian flag on the ice. Players from various TDSB schools enjoyed a brief pre-game skate with the players, rode the Zamboni between periods, watched the warm-up from the Marlies bench and ushered the Marlies onto the ice with a tunnel of “high-fives”. Chief Academic Officer Karen Gravitis performed the ceremonial puck drop. 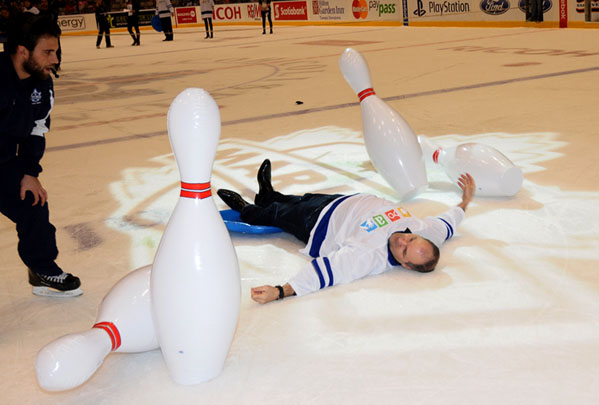 As terrific as the game was, it couldn’t match the excitement generated by the Superintendents who entertained the crowd during the intermissions. John Chasty, Sandy Spyropoulos, Uton Robinson and Karen Gravitis competed in a special"shoot" competition, won by Superintendent Chasty. In the second intermission, Beth Butcher, Mike Gallagher, Ian Allison and Don McLean demonstrated their courage and daring in the “human slingshot” competition. Superintendent Butcher narrowly defeated the defending champion, Superintendent Gallagher to take home the coveted slingshot trophy. 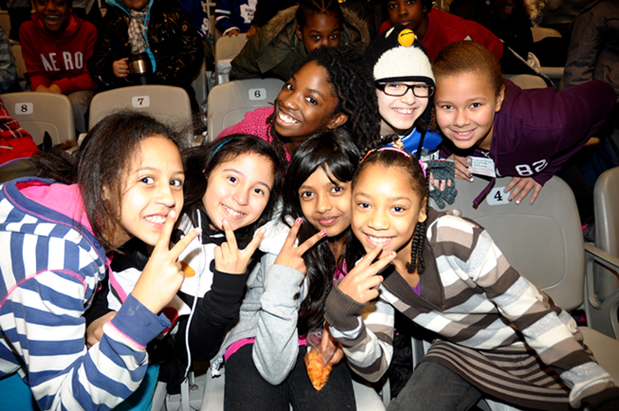 The event was also a winner for the Toronto Foundation for Student Success (TFSS). Prior to the game, the Marlies presented Catherine Parsonage, Executive Director of the TFSS with a cheque for $18,705 for programs that assist students in need.